2017 is a special year for JB Investments in Poland: After six years of successful relationship the 10th brand-new PC-12 NG was delivered to its buyer in April, and the company celebrated its 25th anniversary in June. Pilatus Aircraft Ltd

“JB” stands for Jan Borowski, founder of what is now Poland’s leading General Aviation company. Jan has been fascinated by aviation from his very earliest years, and went on to qualify as an aviation engineer in Poland. Even so, his career began in the automobile industry. In 1977 he became a Mercedes dealer for Warsaw and for many years he managed his own garage with up to 35 employees. In the early 1990s, one of his customers asked him for assistance with the purchase of an aircraft. Happy to be involved, Jan made contact with the supplier in the USA and conducted the negotiations. That’s how he first came to rub shoulders with selling aircraft.

Recognising new opportunities in his country after the political transformation, Jan set up his current business, JB Investments, in 1992, initially selling both cars and small light aircraft. He needed a big dose of idealism to resist the naysayers in the early years. There were plenty who told him: “How will you ever sell any aircraft? Folks don’t even have enough money to buy a car from you!” But Jan was not so easily discouraged and in 1997 he was named as official dealer for Piper Aircraft in Poland. He then became a representative for Diamond Aircraft in 2000. Eleven years ago, Jan decided to concentrate entirely on aviation, and sold his Mercedes agency. He started training as a private pilot at the same time, fulfilling a long-held dream. He flew his first hours on an Aviat Husky, before gaining experience on other models. He has logged over 2,700 flight hours so far.

JB Investments is located at the small private airfield of Konstancin Jeziorna. The 27,980 square feet (2,600 square metre) hangar is conveniently located 11 miles (18 kilometres) south of the centre of Warsaw. The aerodrome has an 2,790 feet (850 metres) grass runway – no problem for the PC-12, of course. Today, JBI is the address of choice for general aviation in Poland. In addition to Pilatus, Jan Borowoski also represents Diamond and Piper Aircraft in Poland, he further acts as dealer for two helicopter manufacturers.

His team comprises 15 employees, all engaged in the sale of new and used aircraft, and provision of maintenance services. Jan’s daughter, Magdalena, works for the company too: she is responsible for marketing and is also involved in sales projects, mainly for helicopters. A smaller hangar on the JBI site bears witness to Jan’s longstanding passion for historic aircraft: visitors may admire a Polish training aircraft from the 1950s (TS-8 Bies), a two-seater Soviet training aircraft, also from the 1950s (Jak-11), and a timber 1930s Polish powered glider (BAK II). An association of three employees takes care of the reconstruction and maintenance of the three aircraft, which Jan occasionally takes to air shows. 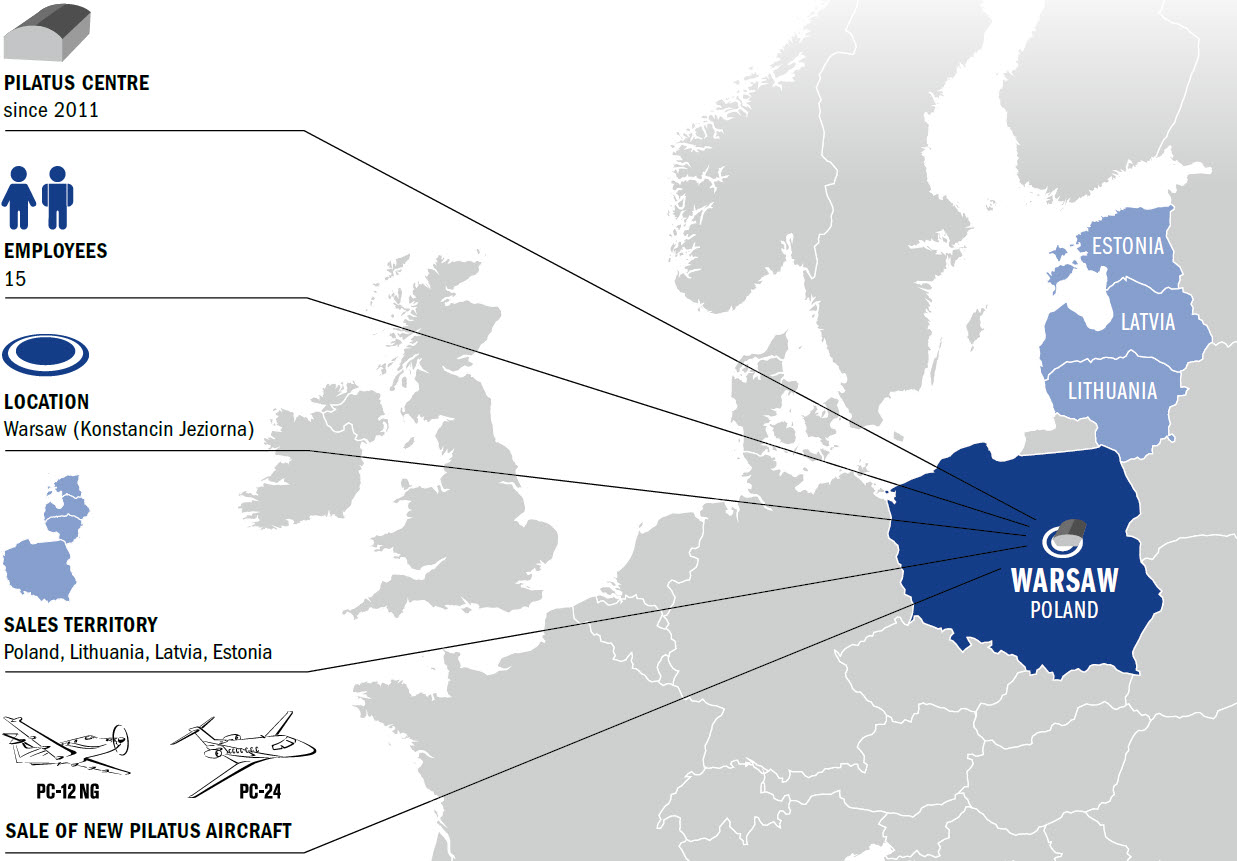 SET-IMC as an opportunity in the polish market

The successful relationship between Pilatus and JBI goes back six years already. Jan Borowski sees excellent potential for the PC-12 in his country: “Poland is a vast, largely flat country with an underdeveloped road network and fast growing traffic volume, an uncompetitive rail way system and only a handful of local airlines. It’s an environment with good opportunities for a versatile aircraft like the PC-12, which offers a fast, safe, comfortable means of travel – especially now that it has been approved for commercial IFR operations in Europe.”

JBI held a big party to celebrate its 25th anniversary in June this year. Guests included PC-12 customers and representatives from Stans. Another milestone in the relationship between Pilatus and JBI is approaching with the upcoming first delivery of a PC-24 to a Polish customer!

The Authorised Pilatus Centre in Poland
Jan Borowski, Founder and owner of JB Investments
The JB Investments’ team in the company’s own hangar
Menu
Fly Pilatus
Contact Us Search
Click & drag to navigate
Cookies help us give you a better experience on this website. By continuing to use our site, you are agreeing to the use of cookies as set in our Cookie Policy