Anyone who visits the modern hangar operated by OK Aviation at Pribram just under an hour’s drive to the south of Prague will immediately understand the origin of the “OK” in the company name. It’s none other than the call sign country prefix for the Czech Republic, and can be seen on the tails of the many aircraft parked inside the hangar: Piper, Cirrus and Pilatus PC-12, of course. The PC-24 will soon be joining them in Pribram, too, as OK Aviation was also approved as a PC-24 dealer in 2014. A short review of the company reveals how it has evolved from much more modest beginnings.

Lubomir Cornak, founder and managing director of the OK Aviation Group, remembers the exact instant he was smitten by the aviation bug: he was just six years old and flying from Košice to Prague aboard a Tupolev Tu-134A, on his way to visit his older sister. He made the same flight every summer, sometimes travelling as an unaccompanied minor, entrusted to the care of one of the flight attendants. Those flights made a lasting impression on him, and played an important role in his decision to make a career of aviation. He joined a local flying club at 15 and started learning to fly gliders a year later. He subsequently went on to register for a course in aviation at the University of Zilina (in Slovakia, as it is today).

By the late 1980s-early 1990s, the former Czechoslovakia was in turmoil with the fall of the old communist regime in 1989, the end of Czechoslovakia as it was in 1992, and the creation of two new states, the Czech and Slovak Republics, as of 1 January 1993. In the midst of this upheaval, Lubomir saw an opportunity to become an entrepreneur. He dropped his studies and went into business in 1990, aged just 19. Looking back, his only comment is that he understood this was a unique opportunity that would not come again. He had absolutely no idea how to be an entrepreneur! After over 40 years of communism, not many of his compatriots knew any better, either … Lubomir first partnered in a Boeing 707 charter company (which was the first privately owned air operator in Czechoslovakia). The company operated flights from the Czech Republic to Vietnam, from where they imported all sorts of objects – fax machines, for example. Then, in 1992, Lubomir founded his own air taxi company with a Cessna 421C, which he owned until 1996.

Building his own infrastructure

This early company was based at the international airport of Prague, where Lubomir met Hana. She was working in the aviation business. Due to an economic downturn in the national economy, Lubomir was forced to accept a job as an airline pilot in 1996 while he was rebuilding his business, which he restarted in 1998 together with Hana. Their company acquired the sole agent rights for Piper Aircraft in the Czech Republic and Slovakia in 1999. But the terror attacks on the World Trade Center in New York in 2001 heralded a raft of new security measures and it became increasingly difficult for a small general aviation business such as OK Aviation to operate out of an international airport. In 2002, Lubomir and Hana decided to relocate to their current site at the regional airport of Pribram. For the first few years they rented a hangar which they used for aircraft maintenance and sales. They built a new hangar at the same time, which was completed in 2005. The OK Aviation Group still maintains a sales office in Prague. 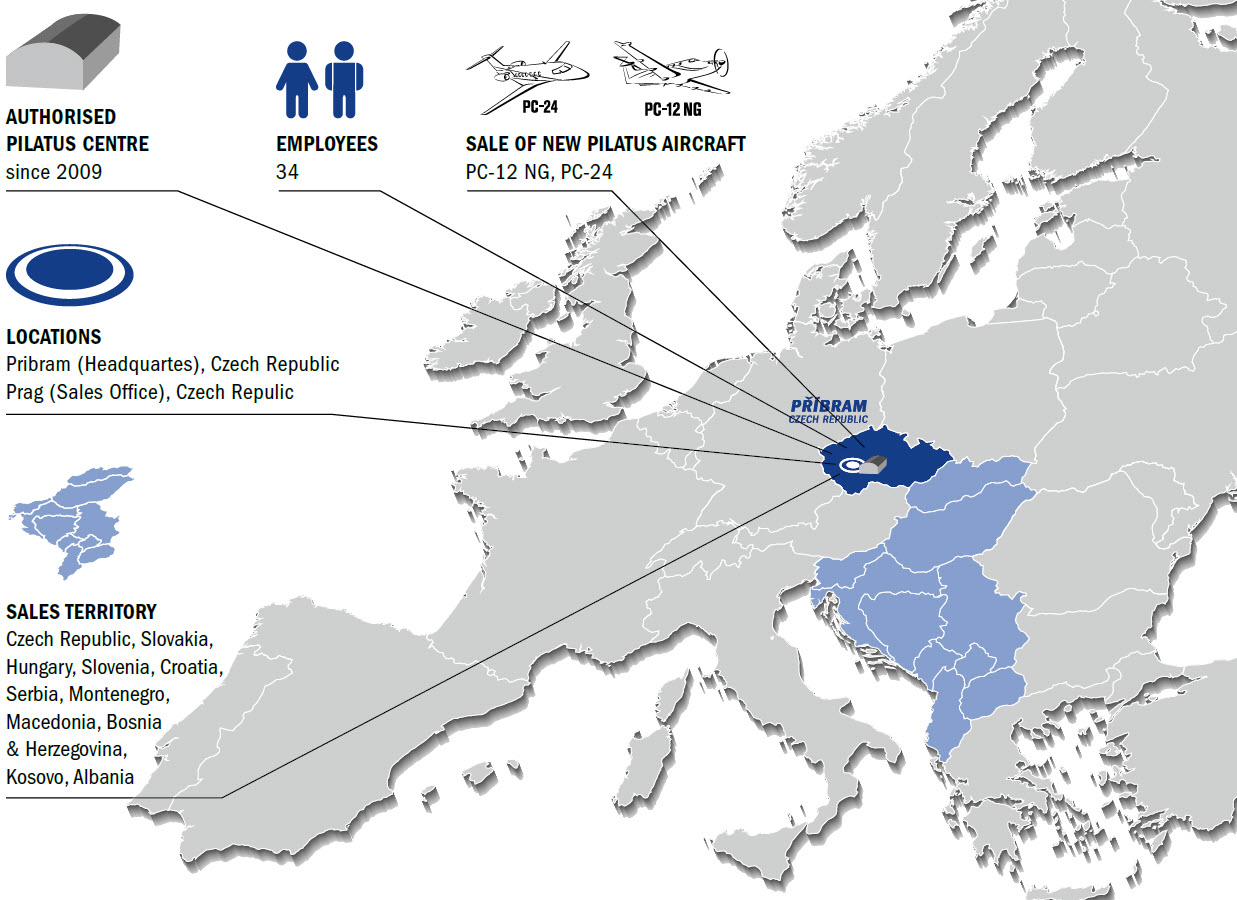 Talks with Pilatus started in 2007 and the appointment as an Authorised Pilatus PC-12 Sales & Service Centre followed two years later. With respect to sales of the PC-12, the Czech Republic is by far the best sales territory for OK Aviation, but Lubomir and Hana have also invested much time and effort in promoting the PC-12 in other countries within their sales territory, notably Hungary and Macedonia. OK Aviation hopes the approval of single-engine turboprop aircraft for commercial operations in Europe will open up new markets – in Croatia, for example.

Via “NetFlight” to own aircraft

Besides selling private aircraft and providing maintenance services, OK Aviation also operates the “NetFlight” programme to demonstrate the benefits of business aviation to prospective customers. There are two ways of taking part in the programme: either as a club member or as part-owner of an aircraft. Club members pay a monthly fee plus the operating cost of hours in the air. Club members fly around 50 hours a year on average. In the second variant, one owns a certain percentage of an aircraft, with a corresponding entitlement to fly a certain number of hours per year. The NetFlight programme currently includes four PC-12s and four Piper Meridians. Regular users of the NetFlight programme frequently decide to step up to purchasing their own aircraft.

With all these activities, the Cornak family is always busy! Lubomir says he and his wife make a great team: he’s the dreamer with the visions and she makes sure he keeps his feet firmly on the ground – not an easy job when dealing with an aviator …!