The African continent is a market that requires understanding of the vast region as well as local knowledge. The considerable distances which separate Europe from large parts of this region is testament to the fact that local knowledge is of paramount importance. Having our own Authorised Pilatus Centre in South Africa is a great advantage – the team has been in place for many years and we are happy to be able to count on their expertise to support the fleet of aircraft in the region. Pilatus Aircraft Ltd

The Pilatus PC-12 Centre Southern Africa (PCSA) grew out of a partnership between three well known South African aviation enthusiasts: Raymond Steyn, Tim Webster and Gerry Wyss. Tim and Gerry were both pilots in the South African Air Force, flying a variety of aircraft such as the North American T-6 Texan. Raymond, on the other hand, has an engineering background; he holds a commercial pilot’s licence and currently flies the PC-12, PC-6 and a twin engine business jet.

The PCSA in its current form was founded by the three business partners in 2006. The close links with Pilatus started much earlier with Gerry Wyss, who holds dual Swiss-South African citizenship and was a successful sales representative for our trainer aircraft during his employment with Pilatus between 1987 and 1991. He then moved to Africa, where he set up “SwissAv” in the mid-90s at Lanseria Airport north of Johannesburg. The forerunner of today’s PCSA, SwissAv was involved in the PC-12 programme from the start and became our first authorised Pilatus Centre in South Africa. SwissAv concluded the first sale of a PC­­-12 to a customer in South Africa in 1995.

A challenging market with potential

The Authorised Pilatus Centre in its current form is located in Hangars 41 and 42 at Rand Airport, southeast of the centre of Johannesburg. The 25 PCSA employees provide maintenance and support services for a total of 83 PC-12 and PC-6 aircraft. PCSA has been successful in selling Pilatus aircarft across a large part of the African continent: some 35 PC-12s all in all since the company was founded. South Africa has been the leading market for sales of new aircraft, but Botswana and Namibia are gaining traction and becoming regions of importance. Tanzania has shown great potential with respect to pre-owned PC-12s and now boasts six aircraft of this type. Gerry Wyss points out that some of the difficulties in selling aircraft in Africa is the arranging of aircraft finance: “The banks are extremely cautious about doing business in Africa”, he explains. As far as maintenance operations are concerned, PCSA in Johannesburg continues to invest in infrastructure, equipment and training. These investments will ensure that Pilatus customers can continue to look forward to a first-class service in Africa! 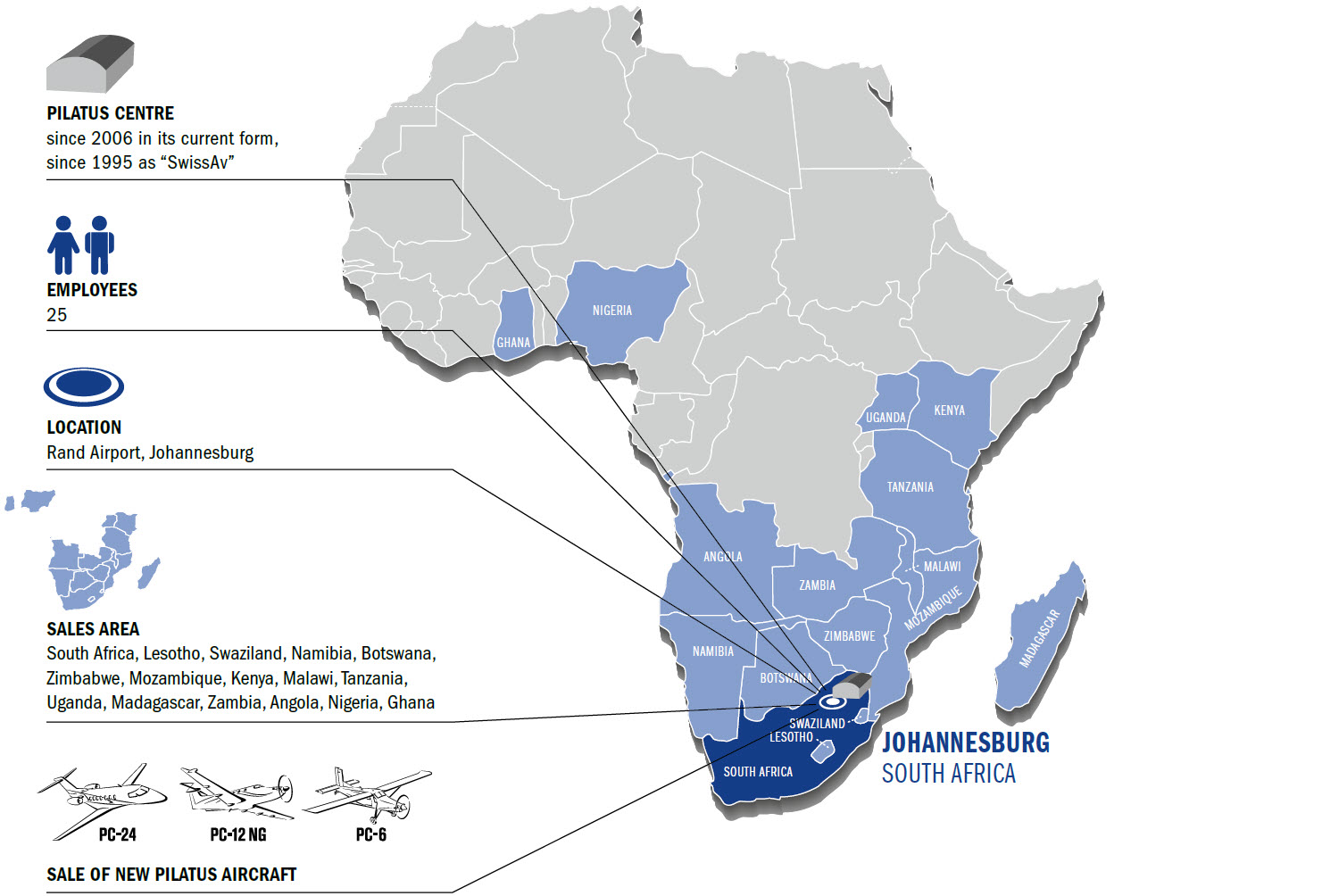 Support for the Kruger national park

PCSA also assists the Kruger National Park with operations to document the wildlife population and combat poaching. Substantial time and investment is donated in order to assist with census counts and Rhino poaching. Rhinos are particularly vulnerable due to the high prices which rhino horn attracts on the black market. In their newly acquired PC-6, serial number 964, PCSA pilots aim to track down poachers from the air and report their position to local ground patrols. This particular Porter started out as a Pilatus demonstration aircraft, but is now used in a very different role following the 14-day ferry trip from Stans to Johannesburg, flown by Tim Webster and Patrick Willcock, our factory pilot.

With its capacity to land on unmade runways, admirable short takeoff and landing characteristics and low maintenance and operating costs, the PC-12 boasts many qualities in high demand on the African continent. Gerry Wyss believes the PC-12 has a bright future in Africa. He is equally confident that the PC-24 has great potential – given PCSA’s experience and understanding of Africa as a region, the company was involved in the PC-24 programme from the outset and is now looking forward to offering sales and maintenance services for our Super Versatile Jet in this part of the world.

The Authorised Pilatus Centre in South Africa
The directors of the PCSA (f. l.): Raymond Steyn, Tim Webster, Gerry Wyss
Wilddogs walking next to a PC-12
The Pilatus PC-6 Porter is used to track down poachers
Menu
Fly Pilatus
Contact Us Search
Click & drag to navigate