Synerjet – The Authorised Pilatus Centre for Central and South America

Synerjet corporation has been part of the worldwide Pilatus network for the past 16 years and is one of the region’s most prestigious business aviation companies. Synerjet operates offices and representatives in Brazil, Colombia, Ecuador, Chile, Panama and Guatemala. Pilatus Aircraft Ltd

Originally established as OceanAir Taxi Aéreo, Synerjet goes back over 20 years. It was named Pilatus Aircraft’s official partner for sales and service representation in Brazil, one of the world’s largest business aviation markets outside the United States, in 2004.

From brazil to the whole continent

Synerjet spent several years focused on selling aircraft in Brazil, with very good results. In 2012, Pilatus appointed the company as its exclusive representative for Central and South America. Based on a new strategy, Synerjet subsequently took on other Latin American territories which had previously gone uncovered.

José Eduardo Brandão, CEO of Synerjet, has managed the company since its inception and is proud of the very good partnership with Pilatus: “Together, we have overcome economic and political challenges to achieve some remarkable successes, with aircraft deliveries to customers in Chile, Colombia, Guatemala, Panama and Paraguay. Structural and organisational modifications, qualified employees, participation in trade shows and promotion in the local media have been instrumental in achieving these results.”

Synerjet has two subsidiaries – Synerjet Brasil, headquartered in São Paulo, responsible for sales and maintenance on Brazilian territory, and Synerjet Latina, a regional sales agent with offices at Guaymaral Airport in Bogotá, Colombia. The company manages three additional service centres outside Brazil. Aerocardal in Chile, Indaer in Colombia and Aeromotores in Guatemala, each providing support to local operators under Synerjet’s supervision and responsibility. 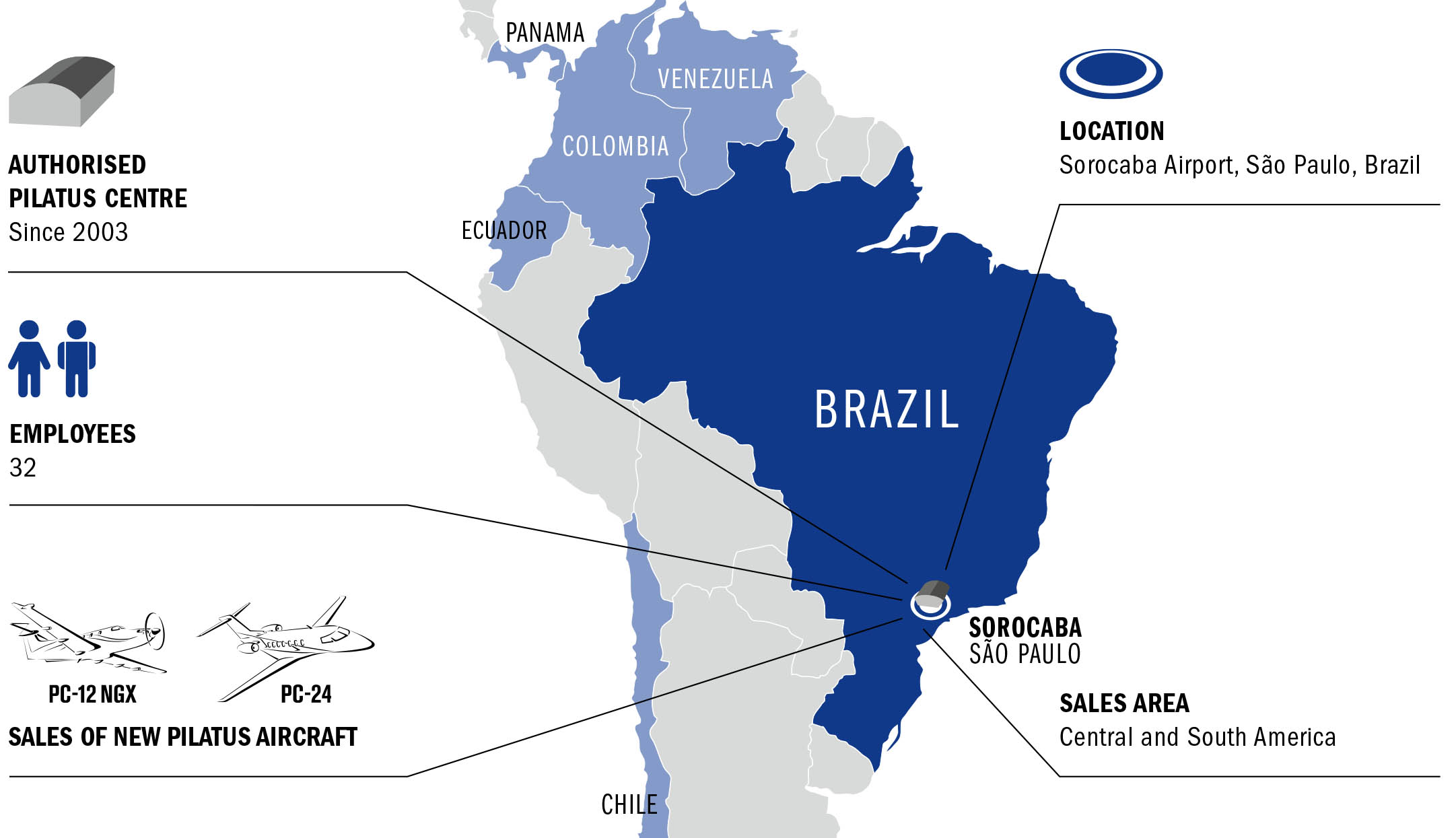 Synerjet has already sold over 60 aircraft in Central and South America since the partnership with Pilatus was launched. “We follow the progress of Pilatus on the world stage very closely. Based on those developments, we are confident of our ability to remain the leader in sales and service”, says José Brandão.

The Synerjet headquarters are located at Sorocaba, at one of the country’s most modern airports some 100 kilometres from São Paulo. Synerjet occupies two hangars reserved exclusively for work on Pilatus aircraft based in Brazil and Latin America. The 32 employees are responsible for 50 PC-12s and one PC-24, performing preventive maintenance, repairs and overhauls as required. They also manage an extensive stock of spare parts. Synerjet can also provide the professionals and infrastructure required for off-base repairs at the customer’s site when necessary.

The Authorised Pilatus Centre in Sorocaba is the largest available for the PC-12, and is certified by the national aviation agencies of Brazil, Paraguay and Uruguay for the provision of specialist services. Maintenance and overhaul work are performed in strict accordance with the manufacturer’s technical guidelines. Technicians receive ongoing training to equip them with the skills to ensure that customers enjoy the high degree of aircraft efficiency and performance they deserve. This extra know-how also delivers optimum workflows with a corresponding reduction in the length of time aircraft spend on the ground.

The company is prepared for the PC-24. In 2019, Synerjet delivered the first PC-24 in Latin America – the 40th Super Versatile Jet built by Pilatus – to the Chilean customer and PC-12 operator Ignacio Del Rio. Three further PC-24s will be delivered to customers in Central and South America in 2020. The first Brazilian PC-24 commenced operations in São Paulo during the first quarter of this year. Definitely another major milestone in the successful partnership between Pilatus and Synerjet.

José Eduardo Brandão, CEO Synerjet, João Carlos Marinho Lutz, PC-12 NGX Launch Customer & Markus Bucher, CEO Pilatus
Ignacio Del Rio (right) is the first PC-24 customer in South America, here next to José Brandão
PC-12
Menu
Fly Pilatus
Contact Us Search
Click & drag to navigate
Cookies help us give you a better experience on this website. By continuing to use our site, you are agreeing to the use of cookies as set in our Cookie Policy